The 2018 trip was not easy. Due to a very hot and early summer, most snow was melted at an early stage and during prime time steelhead all Skeena rivers were at the lowest level ever! We had dificulties in finding the fish and the numbers of fished we had on were the lowest ever! Although the Tyee counting station showed very good number of steelhead escapements. I've been there 25 times now, caught hundreds of steelhead and pacific salmon, was accompanied with lots of Dutch 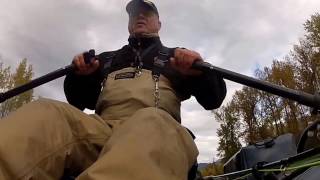 2013 Steelhead Adventures in BC

In 1992, just after the perestroika, I went to Eastern Siberia to swing some flies for coho salmon. Just before the large groups of Japanese and American anglers come and ruined the prices for ordinairy people like me.

I would like to back , but then for the taimen!

Since 2007 I own 2 WaterSkeeter pontoons, suited for class 2 rivers to raft. Now we are able to reach easily fishing spots that cannot be reached by walking in from the backroads.

We can transport easily a couple of rods and other fishing gear.

This is a very convienent way to explore the rivers.

Late August 1990. The 3 of us drove by camper from Calgary to Hazelton.
We parked the camper at the Kispiox Steelhead Camp, at that time owned by Olga Walker.

We met our friends who were there already a couple of days. They cought some steelhead they said.

And of course we hurried to the river!

Within 20 minutes I hooked my 1st steelhead!
I played the fish for 10 minutes or so and since that moment I'm hooked to flyfishing for steelhead!